Tim Meydam was diagnosed with MS in 2000. He and his wife Janet deal with the cognitive meltdown every day.


Tim has been on Tysabri for over 3 years now. He really likes how Tysabri has helped him maintain or improve his abilities, but he has become worried about developing PML, so he has decided to switch. He will be trying the new oral medication Gilenya. So far, he has been off of Tysabri for a month and has had the vision exam done, but we have heard nothing else. I did call his doctor the other day and received a message back stating that the transition was in process. The nurse also said that Tim has to be off of Tysabri for a few months before beginning Gilenya. Really? That was news to both of us.

While Tim is feeling some effects of being off of Tysabri, such as some increased fatigue and walking instability, his cognitive symptoms do not seem to be affected by the change. In fact, he had cognitive testing done again last week and his skills have actually improved. He made the most improvement on his ability to analyze spatial relations, and either improvement or no change in most other areas. He did decline a bit on his word finding ability, especially if the words start with letter C. Interesting that it would be that specific. I had noticed that Tim has had a little more difficulty finding words, but I have not kept track of whether or not they start with letter c.

We will keep you posted on how this transition goes. Tim will be very happy to not have to deal with needles anymore, but we are both wondering how effective this drug will be. We hope that it will be as effective as Tysabri has been.
Posted by Tim and Janet Meydam at 6:29 AM 2 comments:

Tim and Janet On the Trail - Granite Path

We are going to begin posting here again, and the topics will relate to the many aspects of MS and how they relate to our daily lives. So here is an entry that is not about MS, but MS plays a role.

For Christmas this year, Tim’s daughter gave us a Wisconsin state park sticker. This pass attaches to the windshield of the car and allow the vehicle admission into any Wisconsin state park for the calendar year. We thought we had better use it, so we decided to visit as many state parks as we can this year and hike on the trails. Periodically I will post an entry here about one of these state park excursions, called Tim and Janet On the Trail.

Our first state park excursion was to Governor Tommy G. Thompson State Park in northeastern Wisconsin. This park is located about a half hour west of Crivitz, in river country. We started out in the morning, our car equipped with fishing poles, walking sticks, jackets, bug spray, and a cooler. We stopped to buy gas, a picnic lunch, and bait. Of course, since we are rummage sale addicts, we also stopped at a rummage sale, and then a flea market, and then another rummage sale. So much for our goal of getting an early start. By the time we got to the park, it was lunch time.

We ate our lunch by the side of this little lake, which is surrounded by forest. 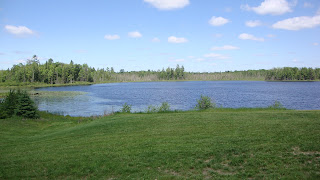 There are no motors allowed on this lake, and the wind was roughing up the water on this day, so there were no boats. In fact the wind was so strong that we had to hang on to our garbage pretty tightly so that we wouldn’t be accused of littering.

We finished our lunch, pulled out our walking sticks, and started our hike by walking in circles. From our parking lot, we could not tell where the trails started! We wanted to hike the Granite Path, so we asked a nearby maintenance worker where it began. He promptly replied that he didn’t know, since he had only been working in the park a few weeks. He did point us in the direction of the trail head, where all the trails started.

We hiked down the trail and up this hill along the power line clearing. 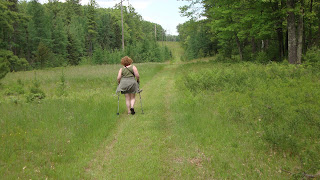 When we got to the top of the hill, we read the trail marker and realized we had hiked the wrong way! This was the Forest View Trail, which is 3.5 miles long. Nope! Not the one we wanted! We hiked another trail that crossed through the woods to the trail we wanted.

Once on the Granite Path, we hiked past several very large granite rock formations. 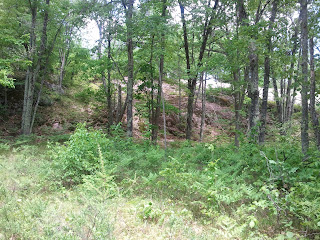 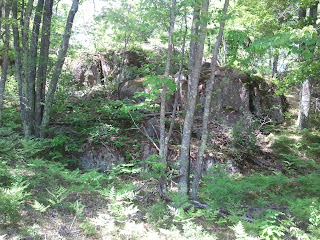 When you see these rocks, the first thing you want to do is climb on them, so one formation offers a trail to the top, shown here. 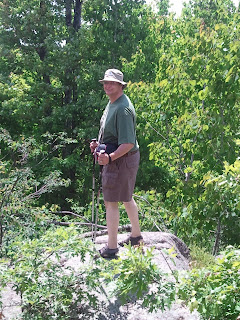 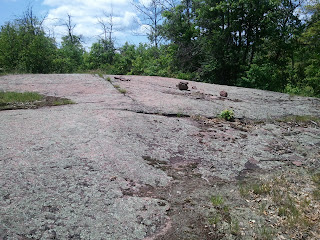 Judging from the stacked rocks and burned areas, this rock has been quite the party spot in the past. 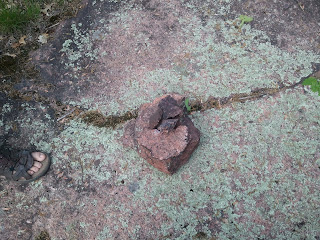 We also hiked through a very pretty popple forest. 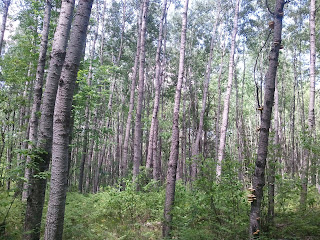 This little offshoot trail led to Popple Rock, which was the largest rock formation we encountered. 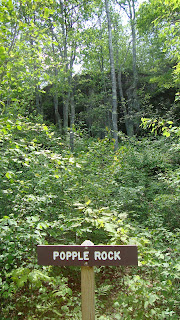 Popple Rock sits on the edge of the park and extends past the park boundary. 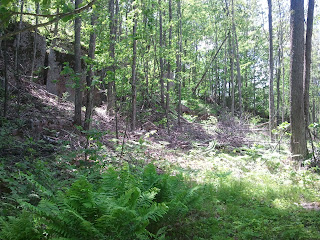 Tim uses walking sticks to keep his balance when hiking, and even though this trail was fairly easy hiking, the sticks came in handy on the down slopes. Tim uses the sticks for support when hiking down hill so that his knees do not give out. Good thing, since I would not want to pick him up!

We saw many varieties of wild flowers, insects, and birds on our walk. 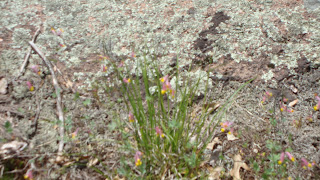 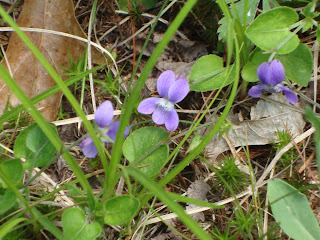 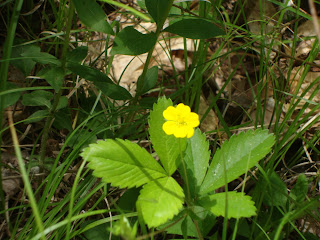 Butterflies and moths flitted around the wild strawberries and columbine, while paintbrush danced along the edge of the trail. 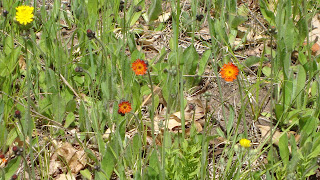 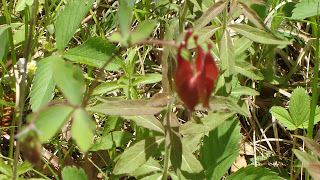 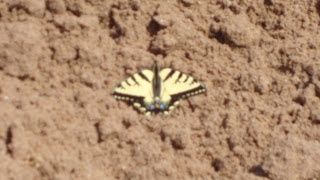 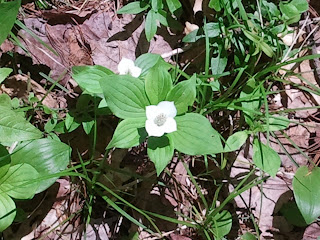 We did not see any animals, but did spot some deer tracks, a few very tiny, meaning that a doe and her fawn had passed through.

This wildlife also came through the park. I think he was taking refuge. 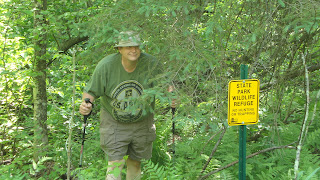 This was a fairly easy and enjoyable hike. Unfortunately, we forgot the sunscreen at home. Tim is now calling me lobster girl! 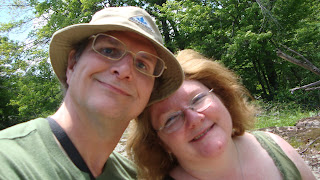 Well, we need to apologize for not having updated this blog for so long! Life gets in the way sometimes and it has nothing to do with the cognitive meltdown and more to do with just being very busy.

In September we posted that we were a part of presenting a cognitive workshop in Green Bay, Wisconsin. Janet's daughter, Calysta Phalen, a media student at the University of Wisconsin - Stevens Point, produced a video for that workshop and the video is now available online via the Wisconsin Chapter of the NMSS's Facebook Page. This video shows how we work together to deal with Tim's cognitive symptoms that result from his MS. We hope that this video will give you some ideas on how to manage cognitive symptoms, so here's the link:


You Are Not Alone: How Tim and Janet Take On the Cognitive Meltdown of Multiple Sclerosis
Posted by Tim and Janet Meydam at 3:07 PM 3 comments:

Ok, this actually is a word. I looked it up. It means to throw somebody into a state of confusion.

Those of us dealing with the cognitive meltdown of multiple sclerosis know this word well. Tim and I dealt with it this morning as we were trying to organize our day and all the things we have to do. Tim is becoming a busy man, which is a good thing, but it requires him to organize his time, his emails, and many pieces of paper. It also requires him to communicate with more people than what he is used to. The whole thing is causing both of us to become “discombobulated”!


How do we handle it? At least 15 minutes each day to sit down and talk through what we both have to do. Tim enters his schedule into his phone and has all the things he needs to accomplish in writing on one or more lists. He also needs to know my schedule, so anything I am doing that deviates from the normal routine also goes into his phone.


This 15 minutes a day doesn’t always happen. We are busy, or tired, or just plain don’t want to deal with it. The problem with that? Discombobulation! (Yes, this is also a word.) We really have to force ourselves to take our 15 minutes or the whole day can fall apart. It has before. It probably will again. At least we took our 15 minutes today so we both know what we have to do. We are up for the challenge, though, and we will do our best to keep our schedules organized. Call it our “anti-discombobulation” campaign. (No, I didn’t find that one in the dictionary.)


By the way, for those of you who are interested, our workshop went very well and we got some great feedback from the participants. The Wisconsin Chapter of the MS Society is working with us to put the workshop on again sometime next year, so we are looking forward to that.
Posted by Tim and Janet Meydam at 5:07 AM No comments: